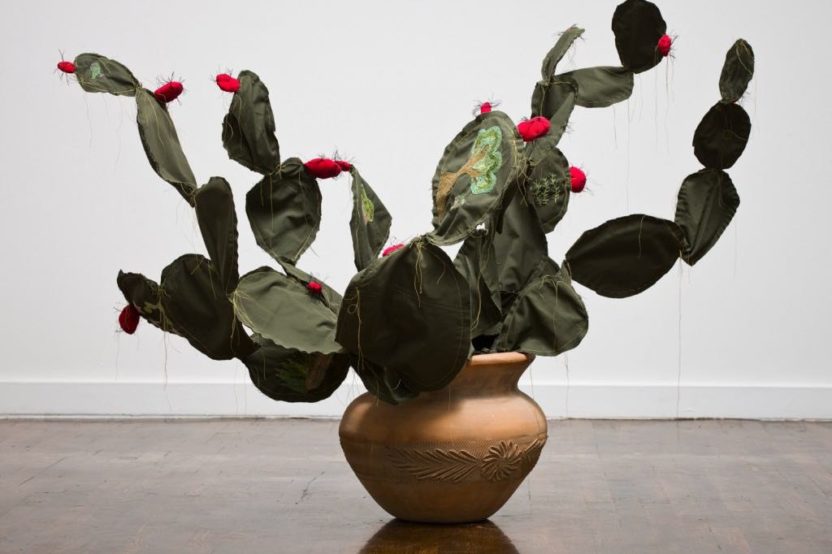 October 7th, 2016 exhibiting through February 12, 2017 at the Desert Botanical Garden’s Ottosen Gallery in Phoenix, Margarita Cabrera’s ‘Space in Between’ show will ask viewers to suspend their beliefs about issues such as immigration and identity with her “soft” fabric plant sculptures made only from pieces of Border Patrol uniforms. In her thought-provoking exhibit, the drab uniform cloth is decorated with colorful stitching, stories and symbolic images from the different journeys Hispanic immigrants have endured coming to America. The sculptures are situated in clay pots to look as if they were real desert plants but the undercurrent of the art is anything but botanic.

I met Cabrera briefly during installation. A native of Monterrey, Mexico, Cabrera is an assistant professor in Arizona State University’s fabric arts department. Made possible by grants from the National Endowment for the Arts and Museums for America, along with other sponsors, ‘Space in Between’ is a collaborative effort by Cabrera and ASU’s Art Museum curator, Julio Morales, with community members doing much of the “sculpting”. The hand sewn cactus pads and leaves are made by people who have a stake in the border issues, some of them personally crossed the border themselves at some point, legally or otherwise. Even though the art can be construed as political, it is actually one of hope, especially when families can be reunited.

One of Cabrera’s team members, Christina, proudly pointed out the embroidered plant she made with the Chilean flag, a dove and the word “Libre”, which means “Free” in Spanish. It is obvious that these artists are proud of their heritage, even if they had to leave their homeland for better opportunities elsewhere.

Art heals and it can also change perspectives. People born in America cannot see themselves having to choose or be forced to move to an entirely different country and then blend into a new culture. Cabrera’s collaborators never ask for sympathy, only understanding.

When crafting the individual parts of these cloth plants, the artisan’s emotions can be expressed in a safe context, thus promoting peace and well-being. The whole structure of each “plant” looks benign at first and it is not until you get closer that you realize the hardships some people faced in their native countries and how that could compel them to leave. With ‘Space in Between’, Cabrera’s message seems to be that in the face of such adversity, beautiful things can bloom.

Check the Garden’s website for gallery hours of operation at www.dbg.org. The exhibit is free with paid admission. After the DBG, this new exhibit will be shown at the Smithsonian in Washington D.C., among other places, where it is sure to grow in momentum. Thanks to Margarita Cabrera, her friends and the folks at the Desert Botanical Garden for their time.