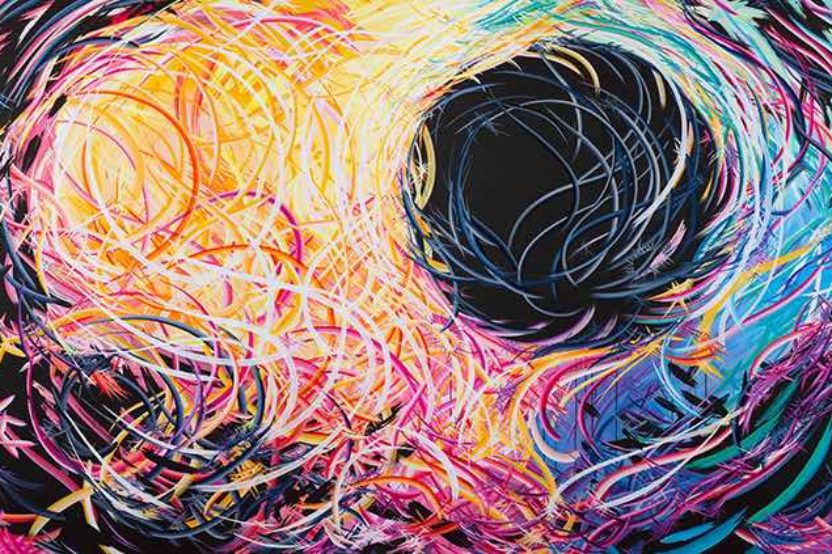 Michael Carini – Creating His Own Place

“Acrylic Alchemist’ Michael Carini has been a creative his whole life. He maintains a studio in San Diego, California and has an impressive artistic background and education. He doesn’t seem to do anything small and he lets his attitude show online in his frequent Tumblr posts. As I look through his images, I can only describe his art as clarity through the chaos: Vibrant, swirling depth. I also get the distinct feeling that his renditions are SO much better in real life. His art is graced with evocative titles, and most of the big events in his life have redefined the course of his styles, such as the ‘Up Side of Down’ series. Carini was accepted at the juried 8th annual Art San Diego exhibition November 3-6 in the city’s famous Balboa Park and has been named a “Spotlight Artist”.

Carini recently took the time to answer some questions from ArtBeat Magazine.  Describing his work as “naked and exposed” (quite literally I saw one image where he was naked in the window of his studio strategically holding a canvas) and said he “uses the paint brush to cultivate his metaphorical voice. Authentic attracts authentic,” he explains. “The right people will be drawn to my work in due time.” Carini calls the artistic journey very “organic”.

Much of his work is large scale and hence a bigger studio is in order.  Developing business opportunities with galleries and clients is an ongoing challenge that keeps things “fresh and interesting,” as any studio and self-representing artist would know. Carini Arts, is a “turnkey art investment service”, offers collectors, high-end hotels and other business an opportunity to hang something inspiring on the wall. Entrepreneurial spirit aside, this young man can paint as technically as he can emotionally.

Having a “tangible history” to the journey he is on is important to Carini, of which failure is a big part.  “Learn to embrace struggle,” he claims when asked what he would tell other artists interested in a professional path.  “If you are not failing or hearing NO, you are not pushing yourself hard enough.” To maintain his focus, Carini does not spend too much time comparing his work to others or going to many exhibits. If he does take time to attend an art event, it is when his frenetic bursts of creativity are otherwise resting and rejuvenating. He is gratified that Loyola Marymount University, which he attended, “pays him to come back and lecture.” His belief that “the time, effort and the soul that goes into it” is what makes art valuable and is also what makes his art so compelling. He is resolved to educate the public about “value and substance” and lead us away from cheap immediate gratification like a colorful pied-piper.

Given the question about his unique talents, Carini answers to the effect that he is brain-ambidextrous, meaning he engages both sides of his brain equally and simultaneously during the creative process.

This, he believes and a strong artistic skillset, is his path for the sustained growth and success that he hopes will outlive him someday. It’s obvious this man is unwilling to back down from his fierce approach to life and by consequence, his art. “Sometimes you have to climb the mountain by yourself and take the road less traveled,” he states. “That’s very much the journey of the artist.”

Please be sure to attend and see his entries in person at Art San Diego ‘Threshold’ themed exhibit, November 3-6, 2016. “Although I had no involvement in the selection of the theme, I find it oddly amusing because mine is certainly being pushed in recent times,” he says.  ArtBeat Magazine thanks Michael Carini for his time and his inspirations!

Visit him at Michael Carini and contact him directly at Info@MichaelCarini.com, check out his updates on Tumblr for more about this steadfast and amazing artist. Learn more about Art-SanDiego here.