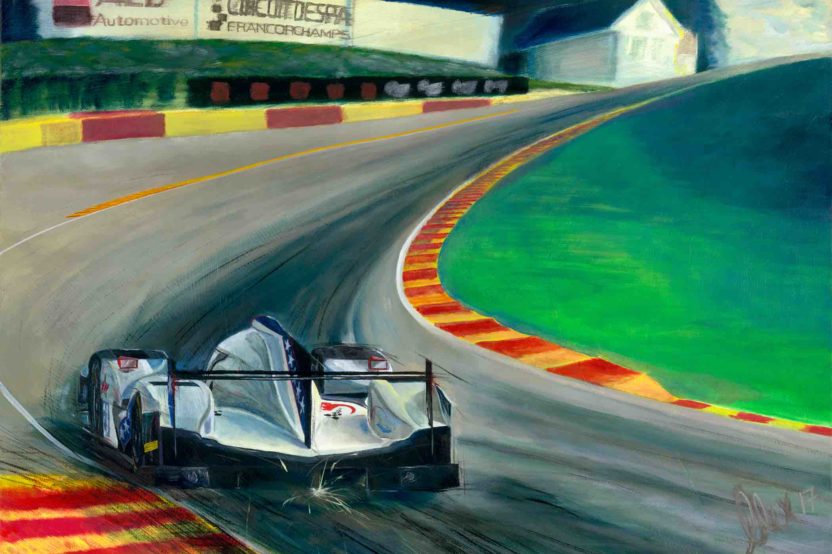 Revving Up the Artistic Engine: Alex Wakefield Captures Our Attention with Motorsport Art

With strokes of light and shadows that race off the canvas, Alex Wakefield is able take the audience on a fantastic journey of sight, sound and even smell. It is as if you can feel the energy of the car speeding past with a blast of wind charged by the smell of fuel as the race car jets across the canvas.

Wakefield finds his inspiration in always finding some new facet of racing that wasn’t familiar to him. “There’s always something exciting to discover in motorsport or anything in life, that excites me to create. Also, overcoming life’s hurdles. Reading stories about how others came through seemingly insurmountable circumstances gives me a realty check; “oh, so it’s not THAT bad for me right now. Carry on…”, exclaims Wakefield.

Wakefield grew up along the Mississippi River in Southeastern Iowa near the town of Burlington. “Living around Burlington, there were many gear heads, shade tree engineers and simply people who liked to tinker with cars and motorcycles. From there, competing with their machinery doesn’t fall far behind,” states Wakefield “Being exposed to that local scene set the stage for me to be interested in all kinds of motorsports. In a chat with Thierry Thompson, he asked me “how does a kid from Southeast Iowa get interested in F1 and European sports cars?” Insatiable curiosity I suppose!,” Wakefield smiles and continues “Sounds, the colors, vibrations of it all is really intoxicating. Definitely not the only one to feel this way about motorsports.”

Like most children, Wakefield was introduced to the arts with a box of crayons. “Thankfully the local public school system nurtured the arts and music for everyone. Discovering my drive to create came with the help from being in that environment.” His medium of choice has grown; oil on canvas, graphite pencil, Micron pens, airbrush and Prismacolors for illustrative works. “My favorite medium is probably the Micron pens. Although, the process gets a bit manic with all of the strokes it usually takes to make an illustration. The end result is really satisfying to me.”

Wakefield believes that some of the keys to his success have been to “create what I’m excited about to a level where I am satisfied and knowing the subject matter of my work in question. Whether it’s a client, media outlet or colleague, being genuine with people I deal with. I also think being open to change is huge too. That’s life’s only constant.”

Wakefield’s opinion is that galleries “do play an important role in how art is displayed and feels that artists are taking some of their power back though,” he expands the thought “It used to be that artists could only make a living through a gallery and other artists whose work wasn’t chosen were left by the wayside. This has been changing for a few years now that I’ve seen. Probably going on longer than my awareness too,” he pauses and continues, “I attended an art jam in Pittsburgh about a month ago, it was phenomenal. All grassroots, put on by some incredibly talented artists, musicians, and performers. I would like to be a part of something similar to this in the future. My contention with galleries, art jams, whatever the event is, it’s gotta be about a fair exchange of energy between all participants. I don’t believe in limiting great art for anyone. If that happens, we could be missing out on the next Picasso, Haring, or Banksy.”

“As far as galleries that I’ve been fortunate to have worked with? The Museu do Caramulo in Portugal is the one which really put my work on the map. They’re great people and are true stewards of not only art curation, but motoring curation.” Wakefield was originally sought out by the Museu do Carmulo in Portugal.

“They were initially looking for a group of artists to put on a show. Turned out that I was the only artist that kept in touch with them. This ultimately evolved to my very own, three month solo exhibit. Having my work in the same museum as legendary artists like Dali, and Picasso is a very special thing. The curator, Salvador, and his family are true stewards of art, motoring, and Portuguese history. I feel honored to have had my first international show with them. I look forward to working with them in the very near future,” Wakefield smiles.

When asked what can be the most difficult challenges about the art industry, Wakefield was open, honest and detailed with his answer. “It’s mainly a question of gaining exposure. This tide has been turning with social media, artist collaborations, and art jams. People haven’t been looking to get into galleries as much as they used to and are taking the promotion of their work into their own hands. That’s much more empowering. It’s great to see a shift like that in my eyes.”

Wakefield adds, “Most artists aren’t business people either. Many of us struggle at times with inspiration, pulling off a new technique or even consistently creating, but now we have to be good at selling ourselves?! Thankfully, I’m able to talk to strangers without little trouble, but not everyone can. That came from a few years trying to get sponsorship for my racing and getting many “no’s”. Creating firstly with authenticity, and then to find your groove. At least if you’re doing that you’ll find your tribe, because the business side can be learned.”

Alex Wakefield’s art is fresh, creatively inspiring and zooming ahead. Like a fine tuned race car, he drives his art to the masses with the speed and accuracy of a Formula One race car driver .