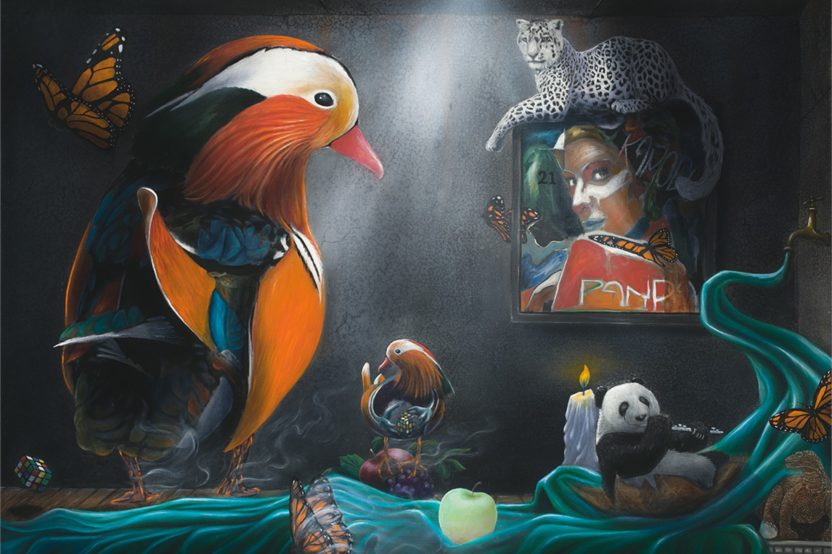 Over the course of two years, Colorado Artist Shay Davis began a powerful journey of artistry and documentation of the animal world. Abend Gallery in Denver extended an invitation to Davis for a solo exhibition slated for August 2018. At the time Davis wasn’t sure what his theme for the exhibition would be until a conversation with a friend, Ethan Borg, helped him decide on the subject matter, endangered species.

This course of action taught Davis quite a bit, more than he expected about endangered species across our globe. It challenged and inspired him and created an animal activist side to him.

For this exhibition Davis has created a bountiful representation of the world around us and the animals that live within it, well over 100 endangered species are represented. The images presented tell a story, some colorful, some barren representations of life; an intoxicatingly beautiful yet sentimental reminder of the allurement of nature and how fragile it is.

When asked what Davis hopes the audience will take away from this exhibition, his answer is simple, “A different insight of what we are doing as human beings to our environment. What we are doing with deforestation and how that affects the environment of animals.”

Do we all exhibit a level of sensitivity to the world around us? Do animal lives affect us more if we are in-tune to their voices? The answers to these questions are uncertain, however Davis is in tune with the animal world and believes his sensitivity to creating the work that he does comes from his dog, Diesel. “I got him in 2002, he is sixteen years old, he is golden and human in my eyes,” Davis smiles and tears up. The bond Davis shares with his dog and the animal kingdom is evident.

Davis has a keen awareness to animals not only because of Diesel, but from his interaction with animals throughout the course of his life. “I love animals….I love the beauty of animals. Creatures that are moving around that are more beautiful than us,” Davis expresses enthusiastically. “Go watch a tiger walk around at the zoo for five minutes, they’re incredible, or watch a black panther, they’re incredible. I am floored by the beauty of animals moving around, conscientious beings other than us, moving around. It blows my mind. Think about a bumble bee, it weighs as much as a hamster,” laughs Davis “it shouldn’t be able to fly but it does, its incredible, its inspiring and I want to put that on canvas.”

His research into endangered species led him to a total of 32 paintings, with frames he built himself and he noted that there are still so many endangered animals that he wasn’t able to include.

Shay Davis, once a high level athlete, takes that same rigorous approach to his art and believes that if you are going to be an artist, you must be the best you can be. “If you are going to throw art out there, you might as well do the best that you can,” states Davis. “It’s not a big red canvas, its weird creativity, its colorful, its mathematical in composition and in the end it just works.”

Supporting the arts is as easy as becoming a collector. Here’s to seeing you out and about in the Art Scene!