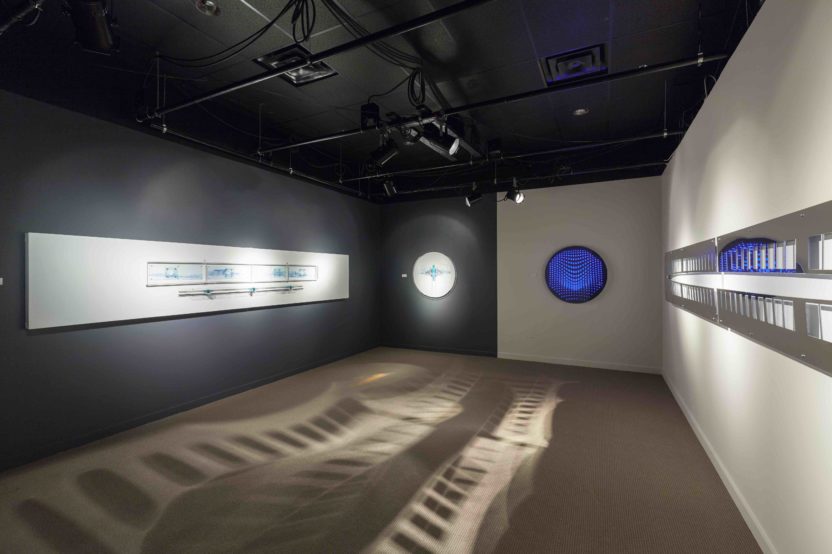 The symphony of sculptural art begins as you enter the Museum of Outdoor Arts (MOA) Indoor Gallery. From left to right and right to left, with wall and pedestal pieces carefully striking the room like a cadence in musical terms, artists Charles Parson, father, and Collin Parson, son, bring a powerful mixture of compelling art forward like a smooth melody. COUNTERPOINTS is the last exhibition of the 2017 MOA season; A Must Attend closes Friday, December 15th.

Charles who prefers the name Chuck, has exhibited extensively with 50 one-person exhibitions and numerous group shows throughout the region and nationally.

Collin in some respects has followed in his father’s footsteps to become an artist in his own right. However, as he explains it he was trying to rebel and not be a “visual artist” which is why his original artistic journey was in Theater Design and Technology with an emphasis in Lighting and Scene Design. Collin has also received a Master in Arts in Visual Culture and Arts Administration. Take all of these skills and you can understand why Collin’s art involves light and how that plays on design.

The Counterpoints exhibition is truly by definition:
1a : one or more independent melodies added above or below a given melody
b : the combination of two or more independent melodies into a single harmonic texture in which each retains its linear character : polyphony
2 a : a complementing or contrasting item : opposite use of contrast or interplay of elements in a work of art

“This exhibition is more thought out in the sense that we could have just had our art up, my father on one wall and I on another, but we decided to plan it out,” states Collin and continues “The biggest challenge of this was that he (my father) is way more prolific and just creates, so when I tried to match up a piece to his he would say something like “oh, thats old news, its two months old now, I’m not putting that in”, Collin and Chuck both begin to laugh. “Thankfully my dad can create a piece fairly quickly, so when it was two weeks out from installation I let him know that he needed to create a 20×20 piece.”

“There was a visual structure that we both looked at in presenting the exhibit when we were approached, and yet there was a conceptual side which quite often doesn’t have the linkage in a collaboration,” Chuck pauses and states “Its not a collaboration, it was a counterpoint. I mean it was literally, singing in harmony and other times really a counterpoint.” Collin adds “It was as simple as a sketch; this is what we are doing and this is the size. He would focus on a piece and however he interprets that or vis-versa was how we would create.”

Both are humble in their stature in the arts and how they both can influence each other in their approach to their artistic style while remaining independent. And they both pushed each other further with their art for this exhibition. Both are fascinated with not only each others work and the level they reached but that there are endless possibilities for anyone. “I think the role of an artist is that you can tell people its OK to see the world differently. Its not an elitist thing, but I am happy to see the world the way I see it,” smiles Collin. “Sometimes I feel sorry for people that can’t see some of the beauty, even if it isn’t like my dad, who notices the I-beams under a bridge and sees beauty while others only notice the rust, my dad notices the connections and says “isn’t that cool”.

Chuck teaches various visual classes at the Community College Denver on the Auraria Campus, Colorado and is affiliate faculty with Regis University’s Graduate Program, while Collin currently serves as the Director of Galleries and Curator for the Arvada Center for the Arts and Humanities in Arvada, Colorado. Both believe that it is possible to be a successful artist while also working at another profession, artistic or not, its just a matter of balance.

While the outdoor sculptures in Westland Park, Greenwood Village can be viewed during regular park hours through August 9, 2018, you only have 4 days left to visit the indoor gallery COUNTERPOINTS exhibition and you certainly don’t want to miss it.

Both are FREE and Open to the public.

Get Up and Get Out to Experience the Arts and Culture that Surrounds Us!