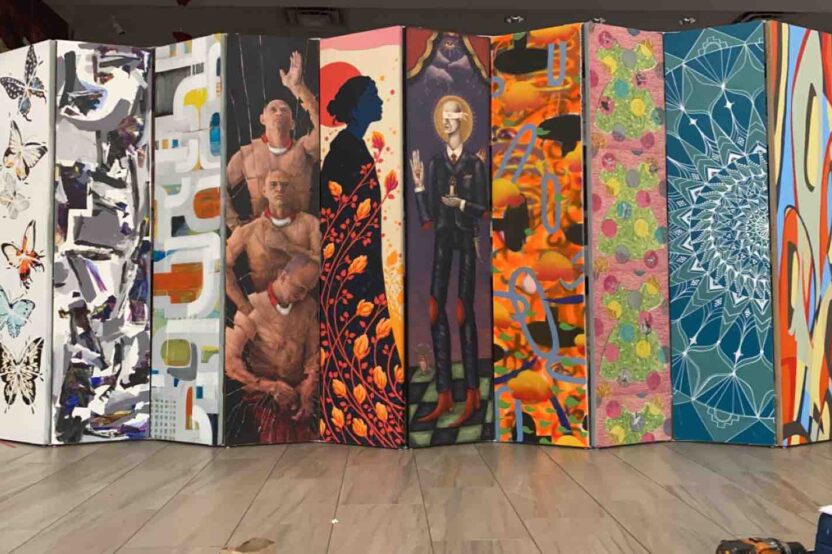 Mural Mural on the Wall

Colorado muralist and fabricator Tom Ward is transitioning at the moment. Two decades spent illustrating for newsprint after college and 15 more turning the mundane into something awe inspiring has led Ward to “an experimental phase now”, he comments on his current ambitions. “I am working on much bigger ideas these days.”

Most citizens about the Denver metropolitan area have probably seen a Ward canon before and not realized that the creator is a triple threat, known for his ‘Fine’ and ‘Public’ art as much as he is known for his ‘Street’ approach. Ward’s talent is that he draws viewers into the moment by embracing a feeling of place, beyond the ordinary urban landscape they are in.

“Murals have been about 80% of my work,” explains Ward. “They are great but a lot of labor, hard to do full time. That is why lately I am spending more time in the studio doing abstract paintings and sculpture.”

Persistence, observation and experimentation are the keys to success, according to Ward. The buzz positions him as ‘eye catching’ and uplifting, something business owners and clientele seem to like. Undoubtedly, his walls have graced more than a few backgrounds for the ‘Gram, I am sure. More images await online where you can see locations and then visit each mural in person. Hit up Ward’s Instagram.com/tomwardart account with your best shots.

His recent pieces are no less evocative than his famous vistas, except perhaps more figurative than literal. When asked how he comes up with his ideas, Ward says, “I am very passionate about the environment so I like doing things that relate to nature. Most of my best ideas start as doodles or pop out of my subconscious. I believe the real work happens in your subconscious, so sometimes I just try and get out of the way. Like a lot of people, I tend to over think stuff. I try not to do that and just let it happen.”

Influenced as a youngster by the illustrations of ‘golden era’ Disney studios, Mad Magazine and Warner Bros. Cartoons, Ward moves forward artistically with a perspective firmly rooted in these classic cultural icons as well as a deep appreciation for modern masters. “I drew a lot with my siblings and my mom had many art books at home. I looked at them constantly,” Ward recounts. “I remember seeing an exhibit of all the Impressionistic biggies as a kid once. It was breathtaking. I realized the prints in the books never came close to seeing them in real life. The color in this one Gaugin really hit me.”

Ward’s passions have led him to become a contributing artist for the Amazon Aid Foundation, whose mission is to educate, inspire change and promote realistic ways to save – essentially – the “lungs of the Earth,” he states. The energy for all this creative output comes from outdoor activities like taking walks, mountain biking, snow boarding and – occasionally – surfing. He stays in touch with a throng of his old newspaper buddies, thanks to social media, and keeps many other local artists around as friends, too. “Going to shows and art openings is a big outlet for me. Obviously less so now,” he laments.

As harsh as it may sounds, Ward counsels other artists to avoid doing too much work for free. “Occasionally,” he admits, “It might be necessary to open doors. I do work with some non-profits, usually once a year. Last year, I donated a mural to a well-known organization. But if you make a habit out of it you’re not a professional and you are devaluing yourself and all your contemporaries.”

Not to diminish the spirit of philanthropy, however, it is only sage advice. Since so much of art finance is sold piece by piece, we agree that artists should uphold their value in society by being fairly compensated their work.

“The reward is being my own boss, having freedom and getting paid for something I would probably be doing anyway,” Ward confirms. Check out his current participation in the installation Working Separate Together at Colorado Mills Mall through the end of December. Ward is also expecting a solo show next year for the city of Thornton, TBD. Stay tuned!