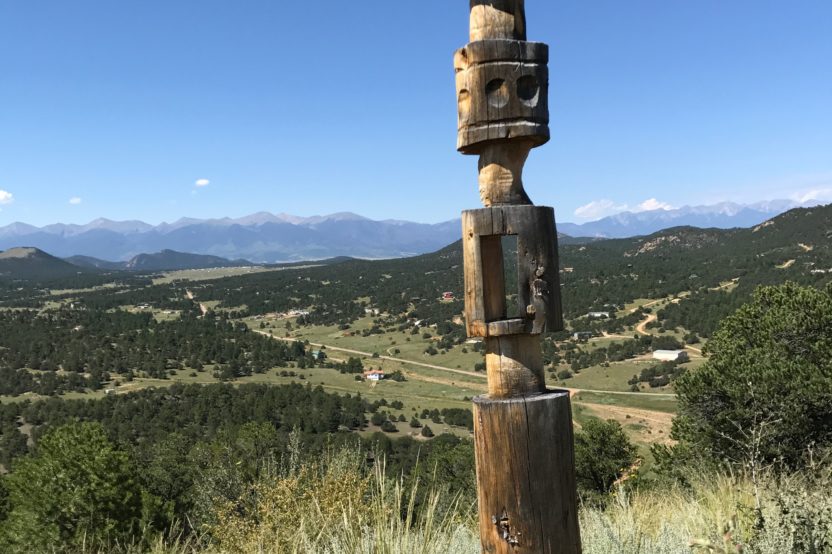 According to Wikipedia, totem poles are, among other things, “stylistic representations of objects in nature” and hundreds of cultures besides the well-known Native Alaskan tribes produce them for a variety of reasons.

Denver born John Crandall was called to totem after a trip to Australia where he viewed indigenous burial grounds on Melvin and Bathurst Islands off the northern coast. “Throughout Indonesia and the Pacific Ring of Fire,” he explains,”totem poles are prevalent and mostly a family story in these societies.” Years of painting abstractive totems on canvas thereafter, combined with a lifetime appreciation for the wood element, has led Crandall to his latest resumption of activity after a period of interruption.

“My brain thinks in wood,” Crandall explains. “I remember being drawn to dead wood since I was 5-years-old.”  Challenges with severe dyslexia made school tough for the budding artist but he credits the art programs for getting him through it all. “I had wood shop two hours a day and was also the teacher’s assistant in pottery and jewelry. I was the sculptor’s club president my junior year,” the just-turned 59-year-old says.” I’ve always participated in some kind of art. I don’t know why, but maybe it’s the only thing that makes sense to me.” 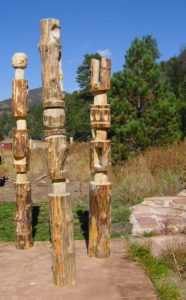 He carves his totemic creations from locally sourced trees, mostly those fallen to the notorious Dendroctonus Ponderosae – aka the mountain pine beetle – with torch and/or chainsaw, never using paints or chemicals in the process that will linger. “I have never killed a tree in my life,” Crandall declares. “Nor do I paint or stain my pieces, either. They are sustainable.” His sculptures are organic, meant to eventually crumble back into the soil from whence they came.

His experience in the construction industry has helped him develop the structural knowledge of such a task and his minimalistic approach leaves the pole with its natural integrity intact, making his pieces secure, long lasting sculptures that will inspire for years. They represent new life and celebrate the vastness and wonder of the Rocky Mountain environment, while also embracing other-worldly imports such as, “We are all in this together.” Crandall put aside his painting and band ‘Hammer Cocked’ in the early 2000s to focus on fatherhood. Perhaps some of our readers may remember an integrative art/music experience or two at Pirate: Contemporary Art a couple decades ago with a group of galivanting sculptors, poets, visual artists and de facto musicians he used to hang with.

Crandall acknowledges that the emotional rewards of raising “a fantastic kid” were greater than trying to keep up with the frenetic pace of the art world. “During this time, I was still pursuing my art, I just wasn’t out trying to be a part of the scene any longer,” he says. Alas, a creative spirit is a restless spirit and now that his daughter is gaining independence, Crandall finds himself once again in the for-public-consumption mode. 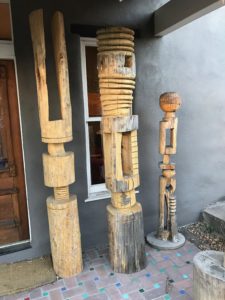 Music is vitally important to Crandall and when he finds it necessary, he can be found playing the didgeridoo for meditative purposes. “It’s one of humankind’s oldest forms of music,” he says.

A man prone to deep thoughts and musings, Crandall credits “the original beat poets” and modern spiritualists like Baba Ram Dass (1931-2019), British author Alan Watts (1915-1973) and American professor Joseph Campbell (1904-1987) for Source while he is working. He lists many abstractionists such as Spaniards Pablo Picasso (1881-1973) and Joan Miro’ (1893-1983), American painters Franz Kline (1910-1962) and Robert Motherwell (1915-1991) who supply additional Juice. He also enjoys inspiring others to see totems inside the tree, sharing wood sculpting with friends such as comedian Josh Blue. 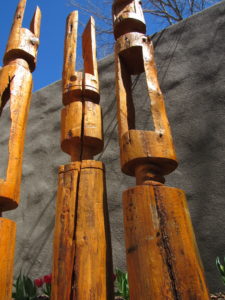 Not one for the social media machine, Crandall instead spends time outdoors as a basic artistic job requirement, hiking around to locate the timber for his poles. Mushrooms hunting is another absorbing interest of his. “Mycology has been an obsession for about 10 years,” Crandall shares. “I find it fascinating to wander around in the woods and look for the many different fungi growing on the forest floor.” 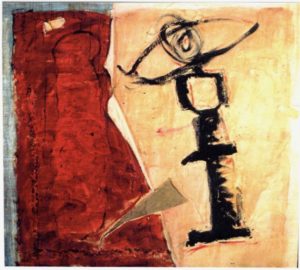 All of Crandall’s travels and hobbies, along with the shapes, sights and textures of Mother Nature are interfused into his paintings and sculptures. He tells us that he has had to recently restock the artistic cupboards, so to speak. Chuckling, he says, “A year ago, I went on a blitzkrieg and sold all my totem poles and have had to create new ones for my upcoming show.”

Expect to see some interesting things during his exhibit at Mary Mackey‘s Urban Mud Gallery, 530 Santa Fe Drive… NEW EXHIBITION DATE TO BE DECIDED… please check with the gallery. Click for Artist Reception and gallery information. Mr. Crandall invites folks to reach out with questions or comments at his email link above and to look for what is new on his Facebook page HERE