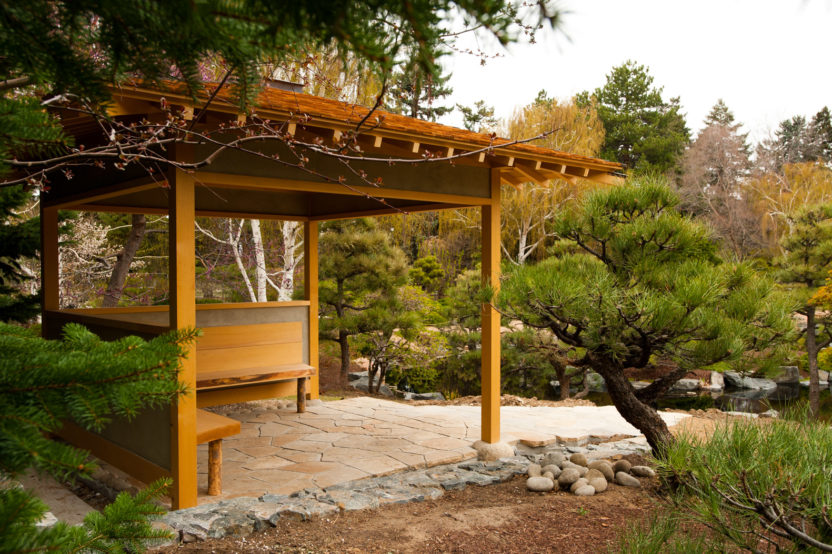 To walk through the Denver Botanical Garden is to walk the earth in a single afternoon. Gardens mirror habitats from humid jungles to arid deserts with precision and care. As the painter unites colors on her palette so too do the garden’s curators blend flowers, trees, and shrubs with delicate appreciation to evoke awe and appreciation. Nowhere is this synthesis of consciousness and nature more recognizable than in the Japanese stylized Shofu-en garden: the “garden of pines and wind,” where visitors are lead by a curving path surrounding a pond. Peer into the water and you’ll see koi hiding under a wooden platform to avoid the Colorado sun, while Ponderosa pines, black stones, and pruned shrubs are meticulously arranged to attract the eye.

“A central premise of Japanese garden design is sensitivity to the local environment,” writes Dr. Ken Brown—a member of the North American Japanese Garden Association and Professor of Asian Art History in the School of Art at California State University Long Beach—in his book Quiet Beauty: The Japanese Gardens of North America. It follows that Shofu-en is a testament to its surroundings, beyond the iron gates that border the botanical, beyond the city limits; a kind of synecdoche of the Rocky Mountains.

The Shofu-en garden is only one of over 250 Japanese style gardens in North America. I spoke with Dr. Brown to understand the principles that unite them. “The garden is a microcosm of nature: idealized, asymmetrical. There’s a sense of human connection to it where you’re relaxed. Your awareness is involuntary. You’re not stressed. You feel intrigued, not overwhelmed to be in the space,” says Dr. Brown. “That feeling creates a sense of restoration. Arguably, that’s why people in Japan, historically at least, built gardens.”

As with all memories, the origin of Japanese gardening practices is only remembered by historians and connoisseurs. Gardening practices were adopted from China like much of Japan’s early culture—along with Buddhism, ceramics, and tea. In those early centuries (e.g. the Heian period, 794 – 1185) gardens were for the upper class: oases said to be beautiful enough to attract the gods, and worthy of a nobility seeking refuge from urban confinement. They became focal points for bourgeois socialization, a world unto itself where people would recite poetry, host parties, and connect with their ancestry.

We can view Japanese style gardens as four-dimensional textbooks of Taoism, Shintoism, Confucianism, and Buddhism. Religion guided the ink of ancient garden manuals, informing the placement of every rock, stone, shrub, pagoda, and lantern, and imbuing them with an underlying religious and historical symbolism.

To some extent, a culture unconsciously expresses itself through its gardens. To look at the Garden of Versailles, or even a typical Westerner’s backyard garden, is to see “geometry, human control, rationality, order of the world expressed in landscape, that is under our dominion,” Dr. Brown tells me. On the other hand, Japanese gardens ask “how we fit ourselves into the natural world as one part of it.” It’s the choice between symmetry and asymmetry; between domination of nature or concordance with nature.

For over a thousand years Japanese Flower Gardens have served as pockets of tranquility amid cities bustling with peddling merchants and moody warriors. Few other cultures have permeated with a persistent love of nature as does Japan’s ocean-scented air, without the need for a recurring Rousseau or Wordsworth to point to the trees. Perhaps, Japan’s relationship to their gardens is best summarized with the following: “The heart of man can never be understood,” writes the poet Tsurayuki, “but in my native village the flowers give forth their perfume as before.”

What began as a mark of high sophistication because of its foreign nature was quickly molded into an independent and rich tradition. A similar absorption is taking place in North America.

Japanese gardens first appeared in North America in the late 19th and early 20th century, as authentic representations of life across the Pacific—a mirror-stroll through Kyoto. It was a cultural outreach program, a way for the Japanese government to connect with the industrialized world it belatedly joined (and quickly mastered).

Post World War II, North American cities built Japanese style gardens as symbols of peace and friendship in the aftermath of a terrible war; as mediums of cultural exchange and promises to a prosperous interdependent future. The gardens were beautiful, but inseparable from their symbolic identity as embodiments of Japan.

But now, in the 21st century’s adolescence, North American Japanese Gardens are tossing aside the strict purist representation of Japanese culture that began the 20th. Instead, gardeners are embodying the core functions of Japanese style gardens: to create restorative, healing spaces—miniature worlds where strollers connect with nature, themselves, and others; rediscovering where these gardens fit in a hyper-digital and distracted age.

The therapeutic value of Japanese style gardens has scientific weight. In the 1970s and 1980s, Rachel and Steven Kaplan researched how environments affect psychology, asking what is the optimal landscape to promote well-being. What makes us feel good? “People have a soft fascination with things; not big dramatic waterfalls or cliffs like Yosemite, but the play of light, the soft sound of water, a stream or a path that bends around a curve,” Dr. Brown tells me.

He adds, “The things they describe suit Japanese pond style stroll gardens to a tee: place apart, complete world, beginning-middle-end, visual complexity but not unknowable, sense of mystery but not overwhelming, soft fascination of things like murmuring water, rustling leaves, light and shadow.” In retrospect, it’s natural to feel a sense of awe in recognition that Japanese gardeners recognized an arrangement which fostered mental well-being centuries ago. But, perhaps, that’s the result of an East-Asian philosophical tradition and the erudite artists who interpret and transform that history through their individuality.

What you experience as you walk through any Japanese style garden is living art. If we think of ourselves as a part of nature—as expressions of nature—then the garden architect who breathes form into landscape is the spirit moving nature: an artist acting on and growing with themselves. But a garden’s life doesn’t begin and end with a garden designer. The garden has a dynamic identity: taking on the essence of its age, and transformed by the hands that tend to it.

“Thus, it’s the gardener or gardeners—maybe generation after generation of them—that raise the child. That’s the artistry,” says Dr. Brown. “How do your prune this tree so it will grow? Now there’s an apartment building in the distance so now we want to prune it in a different way to block that out. So, a garden is a living work of art that is always changing, and you have two artists. You have the garden builder (designer/builder) and the gardener, who is not maintaining it (because maintenance implies it’s finished and you’re keeping it at something—like repainting a bridge). So the gardener is the secondary artist, who trains it, who works with it, who raises it. That makes gardens a really complex and interesting and different art form.”

But it’s difficult to remember all of the artistic and foundational parts that fit to create and shape a Japanese style garden. Is it even necessary to know them? I asked Dr. Brown how he approaches Japanese style gardens, his thought process for fully inhabiting the moment. “I try to feel it viscerally with my belly so to speak, what the Japanese call ‘understanding with your belly.’ Just ‘how do I feel in this space?’ Maybe that part doesn’t make me feel very good but ah, here’s a part that I like. And I’m just going to stay here because this part works for me.”

Seeing every part of the garden isn’t as important as discovering where you find tranquility; don’t try and see every painting in a museum to earn an achievement badge. Find the painting that speaks to you; find the part of the garden that speaks to you. Tranquility comes to those who pay attention, who find a particular place amid the pines and plant their roots: listening, smelling, and seeing; immersed in the here and now.

Dr. Brown hopes to see North American Japanese Gardens become spaces of communal involvement as they once did for Japanese aristocrats. A place where communal programs have visitors prune and rake the garden, care for it and form a bond. Anyone who’s grown anything knows that cultivating a plant brings a new joy that goes beyond aesthetic appreciation. It’s also soothing, and makes the static electricity of hyperconnectivity fade into the background, transforming into a gentle, trickling stream. 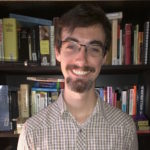