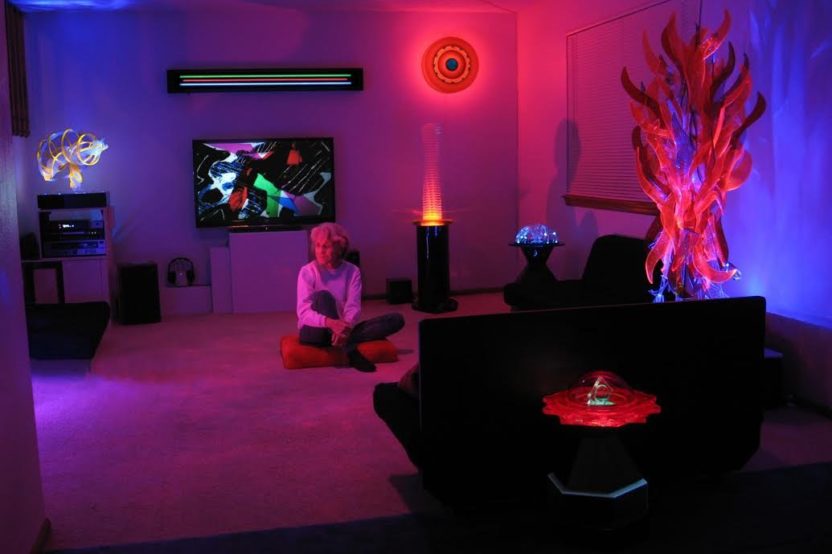 Quiet your mind. That’s the precedent when entering into the showroom of Dorothy Tanner, where the setting means everything. We all know what it is like to prepare your home or dining room for a special occasion. The seating, placement of flowers, the arrangement of everything is so important. This is entirely true of the configuration of creations within her studio.

It took two years before our life’s schedules would align for this interview. It was as if the stars knew that the setting wasn’t right until now. Her showroom is dark upon entry from the bright outdoors. It takes a few moments to begin seeing the colorful lighting around you as your eyes adjust. It takes a few moments more to grasp the beauty that surrounds you. Leave everything that you carry with you at the door; your uncertainty, your day of working that 9 to 5 job, because you have now entered into the serenity and positive light that is the artwork of a true legend.

Dorothy, a native New Yorker, found it to be an “easy trip from the Bronx to Manhattan” when friends suggested that they visit the Museum of Modern Art. “In the lobby, I saw Picasso’s ‘Guernica’ and was absolutely floored by its power,” smiles Dorothy. “On another occasion at MoMA, I saw two magnificent sculptures of elongated figures; a man and a woman on each side of a gallery facing each other with a philodendron next to each figure. It was the first time I saw sculptures by Wilhelm Lehmbruck. It was so perfect for the setting. I was very affected by how the room evoked almost a religious experience. It deepened my appreciation of the arts.”

Dorothy began studying at the Jefferson School of Social Science with Aaron B. Goodelman and then later took a woodcarving class at the Educational Alliance with Chaim Gross. “I did not become more dedicated to art until I enrolled at the Brooklyn Museum Art School. The art school at the time was home to many European artists like Max Beckmann who fled Nazi atrocities. While attending the school, I met Mel Tanner through a classmate who brought me to Mel’s studio on a date,” reminisces Dorothy. “His paintings were so exceptional that it was hard to believe it was a student’s work. He was attending school on the newly created G.I. Bill after his return from World War II. We married a year later.”

Dorothy and Mel created a new life as a married couple and moved to Syracuse where they opened The Syracuse Art Workshop. “Mel taught painting and I taught sculpture. We also taught children one summer at Syracuse University. Mel and I continued to develop our art and decided to return to Manhattan. We leased a space on East 57th Street and founded Granite Gallery as a co-op,” explains Dorothy. “One of the highlights of directing Granite Gallery was an exhibition at the Loeb Center at New York University that included the participating gallery artists. A forum we organized, ‘The New Face in Art’, included luminaries Louise Nevelson, Red Grooms, Norman Carton and Gordon Brown, the editor of Art Voices.”

Mel and Dorothy received commissions from corporations such as GE, Raytheon, and Air Products and Chemicals. “These commissions resulted in our introduction to acrylic and plexiglass. That later was to become the basic material of our art and still is,” shares Dorothy.

Living in New York, Dorothy declares, “was a fascinating place to live in the mid 1960s. After two years, we wanted to continue our individual art explorations but not as gallerists. We boarded a freighter in Tampa, Florida to Rotterdam, Netherlands, with the thought of living in Europe,” states Dorothy with a gleam in her eyes as she thinks back to this moment in time. “We bought a Volkswagen in Amsterdam with our destination to be Ibiza in the Balearic Islands. However, there were many stops along the way: Spain, Germany, Italy, Greece, France, Turkey and what was then Yugoslavia. We began to meet young people who came to be known as the counter culture and we related more closely to them than our contemporaries. Although we had an opportunity to open an art school in Madrid, we decided that we didn’t want to make that kind of commitment.”

Dorothy and Mel returned to the United States with the thought of going to San Francisco. However, they made a stop in Miami to see Dorothy’s parents and realized that they were tired of traveling. “We ‘temporarily’ stayed in Miami for the next twelve years,” laughs Dorothy. “It was in our warehouse studio that we further explored acrylic and began lighting geometric shapes. Those were the building blocks of the work to follow. It was in this period that Mel changed his medium from painting to three-dimensional objects. The medium evolved into multi-media expression involving the light sculptures, water sculptures, music, custom furniture, aroma, electronics and projection. We called it ‘Lumonics.’”

As you make your way around the studio, Dorothy Tanner’s work requires that you stop and take a deep breath, let it out and then repeat until you have fully grasped the meaning of the work in front of you. There are thoughtfully placed seats that allow you to sit and reflect. On my visit, Dorothy and I found ourselves sitting and conversing in several areas throughout the studio, laughing and talking like old friends, though this was our first meeting. Then, when I didn’t think there was anything more to see or understand, a sliding door was opened and I was led into an expansive room that showcased some of Mel’s work dancing throughout some of her work in progress.

Dorothy’s voice is soft yet her presence is strong. For the past ten years, Dorothy has “been challenged by glaucoma, macular degeneration and hearing loss” but finds that her “major challenge in art is to keep under control the tyranny of a logical mind.”

Her list of achievements and acclaim is grand. “I’m very fortunate to have received considerable recognition in Denver these past seven plus years since we relocated here from South Florida,” she says. “I am honored to have exhibited at the Denver International Airport, Museum of Outdoor Arts, Lakewood Cultural Center and VERTIGO Art Space on Santa Fe Drive. One of my light sculptures was included in the Santa Fe Art District’s Best of 2010 exhibit. A photo of one of my sculptures was featured in The Denver Post for Denver Arts Week. I have also been featured on Colorado Public Television, Colorado Public Radio and print media,” Dorothy continues. “Much recognition has come from people who do not necessarily consider themselves ‘art people’ who are so appreciative of the environment that we have created. I am proud that Lumonics was described in The Miami Herald as “one of the most beautiful experiences in the world of art” and that our team has also presented Lumonics in San Diego, Bangor, Fort Lauderdale and now Denver with much critical acclaim,” she humbly boasts.

The artwork of both Mel (1925-1993) and Dorothy Tanner are on display and for sale at her studio at the Lumonics Light & Sound Gallery in Denver. “We have been invited by the Museum of Outdoor Arts to produce a Lumonics installation,” states Dorothy. “Elements will include light sculptures, music, projection, video and lasers.” The show is titled ‘Reinventing the Image’ and will run October 15, 2016 – February 25, 2017. The Museum of Outdoor Arts has also offered a retrospective of both Mel and Dorothy’s work from January 15 through March 11, 2017. The installation with light and sound will be begin October 15, 2016 and will remain in place until March 11, 2017. It will be a combination of truly incredible works of art by two very important artists.

Dorothy’s list of artistic expression will continue through this summer with a new concert series of live performances featuring Colorado musicians who are also contributing their music for an upcoming compilation she is organizing. This is all part of a fund-raising benefit for Denver NORML.

Dorothy believes that there are no accidents when it comes to her philosophy for work and life. “My interest is in creating spaces that result in an uplifting yet relaxing meditative state”. To quote Mel Tanner from an interview years ago in The Miami News, ‘The whole idea behind everything here is to take light and make it into a shape; a shape that not only solidifies the light, but the life the light touches.” When asked where she finds her inspiration, “I don’t find it… it finds me.”

So quiet your mind, look around and enjoy the light and message of the sculptures; be one with the setting that Dorothy Tanner has created within her showroom and studio.