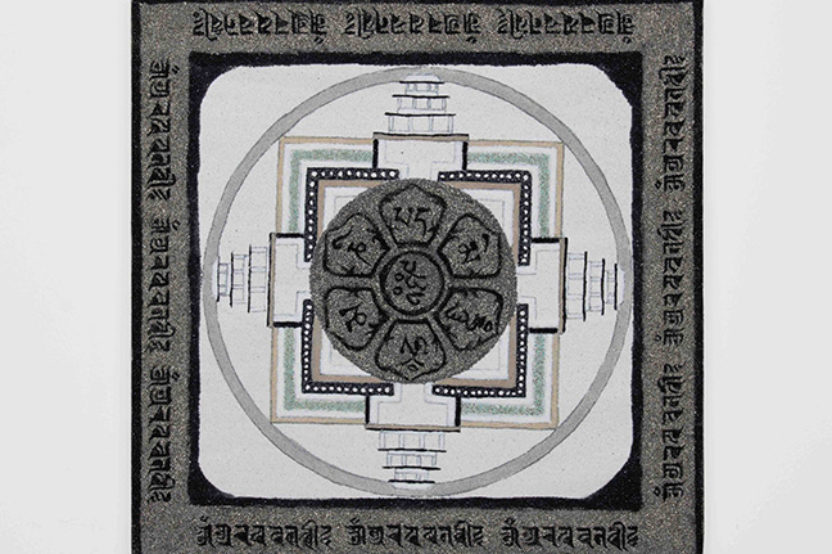 Exhibition Extended: Meditative Mandalas by Rafael Anteby – A Must Attend

Rafael (Rafi) Anteby’s journey to his current Los Angeles exhibition, Meditative Mandalas started at age 13 when he began studying martial arts to ward off bullies at school. A Kung Fu demonstration drew him in and he began studying Kung Fu, Tai Chi, Tai Kwon Do and Hatha Yoga. He found solace in practicing alone for hours – as much as eight hours a day. Those early years imprinted on Rafi the values of discipline and the Tao or flow.

As an adult, his quest for a deeper practice led him around the world to China, Hong Kong, Tibet, Nepal and beyond. His time in monasteries high in the Himalayas afforded him opportunities to learn traditional art forms such as the Buddhist sand mandalas that inspire his work today. In fact, Rafi‘s Meditative Mandalas incorporate traditional techniques from around the world. For example, he learned the hours-long process of combining Arab gum and gold leaf by rubbing it with his fingers, featured in “Healing Mantra”, from a woman in Afghanistan. And he has collected colorful sands from locations as varied as the Black Sea, the Red Sea, Myanmar, the U.S. Gulf Coast, Hawaii and beaches and deserts up and down California to incorporate into his pieces.

Replete with symbolism, the exquisitely detailed mandalas take hundreds of hours to complete. “Purifying White Peacock” evokes freedom, openness of the heart and feminine empowerment with a cherry blossom at its center. The Sanskrit lettering featured on some pieces, including “Himalayan Mandala,” is painstakingly applied two or three times over to create an embossed effect that makes the sand shimmer and dance in the light.

The “Himalayan Mandala” is mesmerizing in its intricacy and rich symbolism. I can do no better in describing it than to share Rafi’s own explanation of its meaning. “The ‘Himalayan Mandala’ is probably the most traditional representation of the authentic mandala composition. It stems from the Lotus Flower – the ultimate symbol of enlightenment, as it grows from the depths of the murky waters and grows upward, blossoming toward the sun and the heavens. The center of the mandala is meant to be an allegory to the Primordial Beginning, from which all life formed, and so, similarly, the mandala flows in concentric circles that radiate from its center. Surrounding the Lotus Flower is an aerial view of the temple motif with its four gates to represent the four cardinal directions. Upon each gate sits a stupa or temple mound. Variations of these motifs are then repeated. Elaborate details utilize the over 40 minerals collected from across the globe. The Tibetan Wheel – the symbol of life with its spokes rests atop another temple complex. A double Fire Ring encases the meandering patterns. The Fire Ring is the symbol for the negative karmic energy that surrounds us (self-doubt, insecurity, pessimistic thought), which, as a Buddhist Mantra, is something strived to be broken on a daily basis. Of course, this is merely a breakdown of the motifs, but each mineral has its own healing properties and energetic affiliations.”

One could spend hours exploring Meditative Mandalas and still come away with a sense of mystery. View the pieces from across the room and enjoy their fullness of color and symmetry. Examine them up close and discover the delicate shading, the impossibly firm yet spontaneous – yes, even flowing – lines.

All images are courtesy of the artist and SZ Advisory. Photo: Lindsay Preston Zappas. 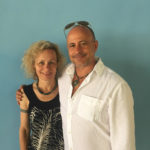 Beth Pitton-August is a contributing writer from Santa Barbara who enjoys finding beauty in nature and people.